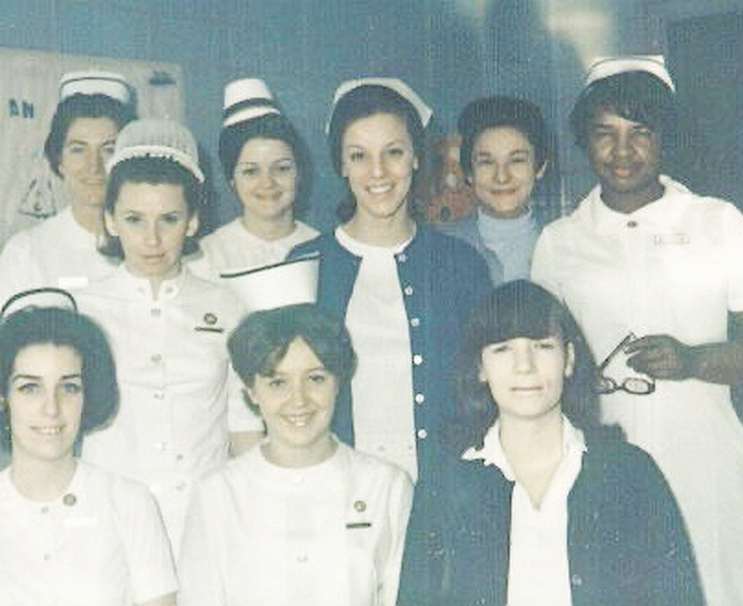 COURTESY OF JUDY WAGONFELD
As a student nurse who began her training in 1959, Judy Wagonfeld (wearing a sweater in the middle row) saw the result of botched abortions firsthand: “infections, damaged organs and hemorrhaging.” After she had a secret abortion in 1972, she had to be hospitalized. 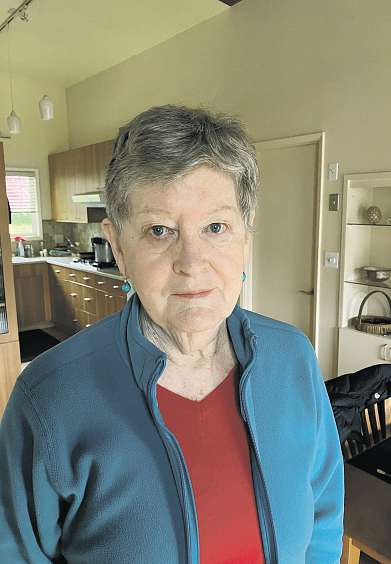 COURTESY OF ELLEN O’BRIEN SAUNDERS
Right: Ellen O’Brien Saunders was a student at Barnard College in New York when she had a painful illegal abortion in 1961. 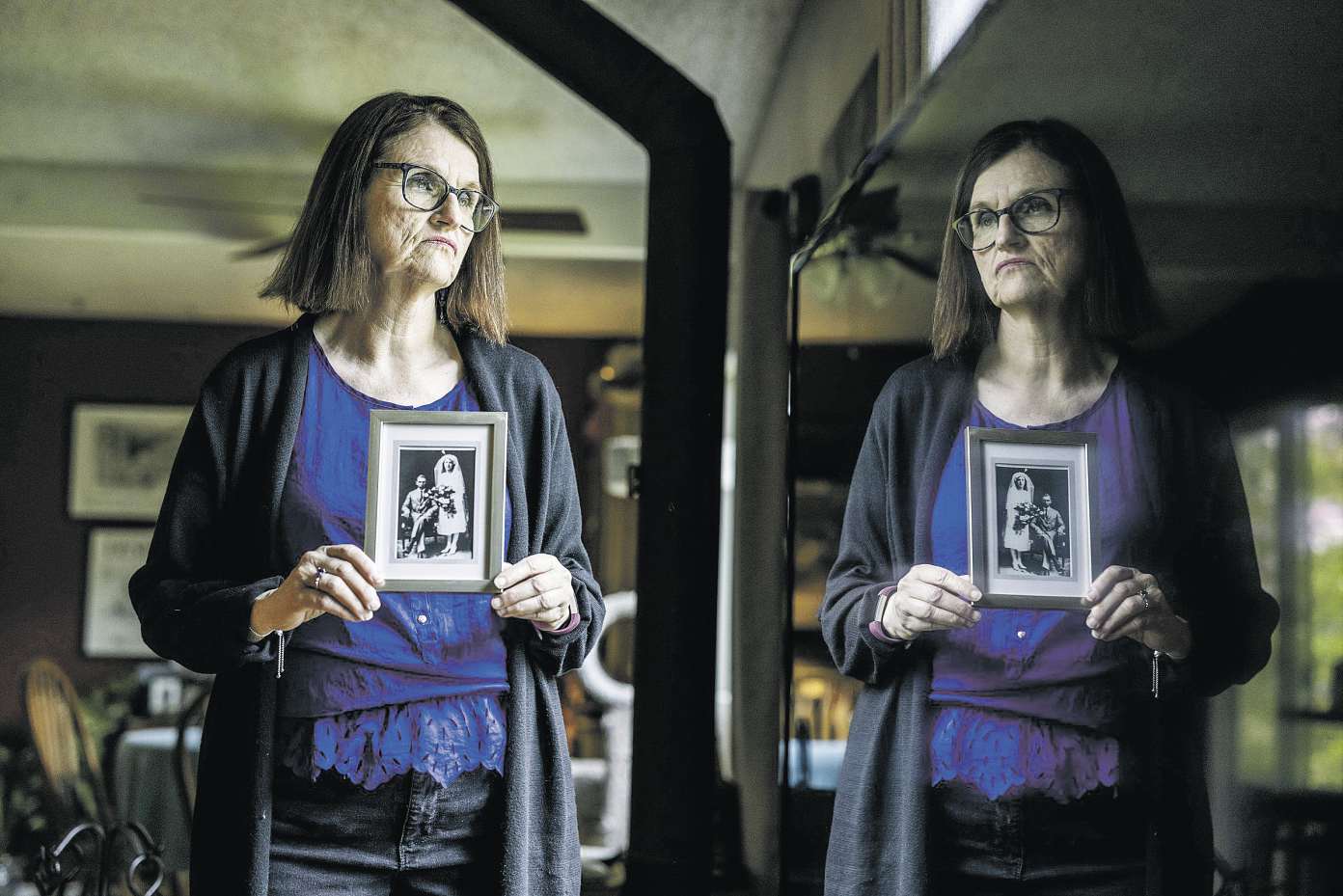 DANIEL KIM / THE SEATTLE TIMES
Above: Trish Karn, from Kent, holds a portrait of her grandparents. Karn’s grandmother, Florence Mewes, a mother of six, died from an illegal abortion during the Depression; the couple had worried they wouldn’t be able to feed a seventh child.
PREVIOUS IMAGE


Louise Martin didn’t know where she was going, and the man who picked her up from an Oklahoma motel wanted to keep it that way.

The man told her and another young woman to put on blindfolds. Then he had them lie on the car’s floorboard so they wouldn’t be seen.

The women exchanged looks. Is this real? wondered Martin, then 18.

The surreal feeling continued when they walked from an attached garage into what looked like an ordinary suburban house. But really, said Martin, now living in Western Washington, the home was “a bustling clinic with nurses, doctors and converted rooms set up as mini-operating rooms.”

It was 1970, three years before Roe v. Wade legalized abortion nationwide, and the doctors, nurses and patients were all risking arrest — as later became apparent.

Martin was put under and woke up about 15 minutes later, tired but otherwise fine.

“I was lucky I wasn’t taken someplace and butchered,” she said.

After the leak earlier this month of a draft U.S. Supreme Court opinion that would overturn Roe, women have been sharing stories about abortions they, friends or relatives had when the procedure was not only a crime but also dangerous.

Kent 69-year-old Trish Karn, for instance, said her grandmother got sepsis and died during the Depression after an aunt tried to give her an abortion — possibly, Karn suspects, with a coat hanger, as was common.

Florence Mewes and her husband had six children — including the 10-year-old girl who would ultimately become Karn’s mother — and thought they couldn’t feed another. The children were brought into Mewes’ bedroom to say goodbye. It has haunted them their whole lives, Karn said.

“Is that really what we want to go back to?” she asked.

Many of more than 300 people asked essentially the same question in responses to a Seattle Times request to share feelings and experiences related to the possible end of protections guaranteed by Roe. Some told of abortions they had long kept hidden, even from close family members, and were wary even now of using their full names for fear of disapproval or a backlash from anti-abortion activists.

(Martin asked she be identified by her middle and last name.) To be sure, with abortion one of the country’s most divisive issues — and the most impassioned opponents likening the procedure to murder — some people who lived through the pre-Roe era support making the procedure illegal once again.

And that anti-abortion movement includes women who themselves ended pregnancies.

Esther Ripplinger said she had nightmares for years after she had a legal abortion at 19 in 1985. “I’d wake up screaming,” she recalled. “I realized it was because I had unresolved feelings.”

Ripplinger is now the executive director of the anti-abortion group Human Life of Washington.

Another woman, who asked that she be identified by only her first name, Donna, because her family doesn’t know she had an abortion, said she regrets ending her pregnancy in the late 1970s. She sometimes drives by the North Seattle clinic where she had the procedure and wonders about the child who would have been.

But others said they have no regrets, despite sometimes harrowing consequences.

Called to the precinct

Martin got a knock on her dorm room door a couple of months after her abortion. A police detective was in the lobby, and he wanted to question her at the precinct.

What for, she asked? “We’ll tell you when you’re there,” Martin recalled the detective saying.

Martin learned during an hourslong interrogation that police had raided the suburban Tulsa abortion clinic where she had her procedure, seized the clinic’s records and found her name. She said they called her a slut and threatened her with arrest if she didn’t reveal who told her family about the clinic.

She refused but was released when her father came storming in. While Martin doesn’t know what happened to the clinic’s staff, law enforcement officials were then going after what they derisively called “abortion mills.”

Police in 1972 arrested a prominent Tulsa obstetrician and two other workers from a facility in a suburban house, according to The Tulsa World, which interviewed a patient who had been blindfolded and told to lie on a car’s floorboard on the way there.

The Roe decision ended the case.

Not ready to be a mother, she visited the offices of men she heard did abortions but whose medical credentials were unclear.

One, she thinks, was a dentist.

They examined her but sent her away with no explanation.

Her pregnancy progressed. “Every day was ticktock, ticktock,” she said.

Saunders’ father finally heard of a midwife providing abortions in Pennsylvania, and she boarded a plane to Pittsburgh.

The midwife, operating out of her house, injected a saline solution that brought on hours of painful cramps, Saunders said, and she couldn’t make a sound because the midwife’s husband was asleep in the room next door.

For when the fetus came out, the midwife gave her a bucket.

Saunders left afraid she would be detained at the airport.

“I felt guilty of disobeying the law, and like I might get caught,” she said. “And I didn’t want anybody else to be in danger.”

She resolved to forget the midwife’s name and address.

“Nobody told me anything”

For Tessa, the secrecy was corrosive, implying guilt and eating at her self-worth.

The retired Seattle software developer said she had an abortion after being raped at 17 while at a conference with her father in 1963. She has told few people since and asked not to use her full name to protect her privacy.

“It has reached a point where I feel … it’s just not right,” she said, referring to the draft opinion that would overturn Roe. “It brings back really, really bad memories.”

Even the word “abortion” was never spoken as her parents looked for a provider. They instead talked about finding a doctor who would “help me start my period,” Tessa said.

She and her parents left their Pennsylvania home for Virginia in the middle of the night.

The doctor she saw performed a procedure that caused a burning sensation and pain throughout the night. She didn’t know what was done to her.

“Nobody told me anything,” she said.

So complete was the lack of information that Tessa went back to college the next day, unaware the doctor had induced contractions that would cause a miscarriage.

Her brother picked her up from school and brought her home, where her pregnancy ended in a bathroom.

She was traumatized but physically intact. That wasn’t the case for many others.

Judy Wagonfeld, a former nurse who began her training in 1959, saw the result of botched abortions firsthand: “infections, damaged organs and hemorrhaging.”

Some women she encountered during a nursing school rotation at a Chicago hospital had to have hysterectomies. Occasionally, she’d come back to the ward to find a woman had died.

It hit her on a personal level when she watched her roommate bleed profusely after an abortion.

“At 3 a.m., petrified she would die, we sneaked out of the dorm to a taxi,” recalled Wagonfeld, now 76 and living in Seattle.

They didn’t go to a hospital.

Word could have gotten out, getting the roommate kicked out of school, Wagonfeld said. So they went back to the person who did the abortion. The roommate survived.

In 1972, with a new job as head nurse of intensive care at a hospital, Wagonfeld got pregnant.

Her boyfriend, a doctor at the same hospital, is now her husband and father of their two children. But at the time, they had only been seeing each other for six months.

They arranged for a resident to do a furtive abortion in an unused room at their hospital. Even though he was a doctor, Wagonfeld wound up with a pelvic infection that gave her a high fever and chills. Saying she miscarried, she was hospitalized for five days.

So much has changed in the half-century since.

Unlike then, different kinds of birth control are readily accessible, though the end of Roe could imperil certain forms of contraception.

And abortion methods have advanced, including through the development of pills that don’t require surgery.

Such pills can be discreetly mailed to abortion patients at home, and due to at least one online service involving a Seattle-area doctor, they are getting into states that are trying to keep them out.

Still, like some of her contemporaries, Wagonfeld believes people will continue to have unwanted pregnancies and put their lives in danger by seeking illegal and unsafe abortions.

While Washington law will keep abortion legal here, 26 states are likely to ban abortion if Roe is overturned. Those states could see a return to back-alley abortions and possibly, Wagonfeld worries, a black market for inauthentic abortion pills.

Only people with means, she added, will be able to travel to places where abortion is legal.

That, too, is reminiscent of the past.

It lasted only several days: just long enough for an abortion in Japan, seeing a sight or two for cover, and a return flight home.