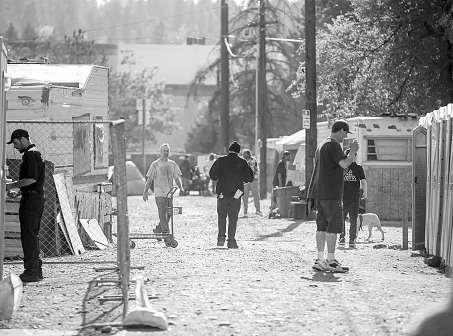 BY EMRY DINMAN - The Spokesman-Review

The Spokane County Sheriff’s Office has been surveilling residents of Camp Hope using infrared technology, triggering the latest legal dispute between the Sheriff’s Office and organizations that provide aid there.

“It is not lawful to use infrared to peer into private homes or living spaces,” said Jeffrey Finer, one of the attorneys representing three Camp Hope residents and Jewels Helping Hands in a federal complaint filed last month after local law enforcement threatened to sweep the camp.

Helicopters circled the camp during the night recently, alternatively using spotlights and infrared imaging, according to videos shared with The Spokesman-Review.

Spokane County Sheriff Ozzie Knezovich acknowledged the use of the infrared flyovers at a news conference.

Finer said he would ask a federal judge to order the Sheriff’s Office to stop its use of the technology.

He cited a 1994 state precedent that ruled that the use of enhanced imaging to penetrate a person’s residence was not permitted by the state constitution without a warrant, arguing that a homeless person’s tent is their residence.

“You can use [infrared imaging] if you’re chasing someone who’s running away, or a camper who’s stranded, but can’t use it to peer into someone’s home to figure out how many people there are,” he added.

In the news conference outlining the city and county’s perceived barriers to addressing the region’s homeless crisis, Knezovich said he did not have a warrant for the infrared flyovers, but his office believes it is legal to use those tools.

He said the flights were necessary to determine the layout of the camp and “what kind of crime” was taking place there. He added that this was at least partially in response to complaints by camp organizers that local law enforcement has not been responding to calls for violent crimes within the camp.

“You can’t have your cake and eat it too,” Knezovich said. “You can’t say, ‘Oh my gosh, you can’t use a helicopter,’ when you come to us and ask us to eliminate the crime in the area.”

“Asking for legitimate law enforcement protection is not an excuse for the sheriff to strip constitutional rights from the residents,” he said.

“And no one, certainly not an elected sheriff, has the right to independently decide to suspend the Washington state constitution.”

Knezovich also said Tuesday that the flights were meant to tally the number of people staying there.

Jewels Helping Hands founder Julie Garcia said the organization has been transparent with local elected leaders and law enforcement about the camp’s census — 447 currently, she said.

Knezovich and Spokane Mayor Nadine Woodward, however, have expressed skepticism at the tally. During the news conference, Knezovich estimated that only between 200 and 300 people were staying at the camp.

The distinction is a meaningful one in the ongoing effort to clear Camp Hope.

The city and county are working to bring new shelter beds online to house homeless people ahead of winter and in order to clear Camp Hope, especially through the new Trent Resource and Assistance Center.

That shelter has 250 wooden beds and 100 temporary mats, and is housing about 270 people, said Maj.

Ken Perine, leader of the Spokane Salvation Army, which oversees the facility.

Those beds and mats are all being replaced with 350 metal beds paid for by a portion of a $500,000 commitment by Spokane County.

Perine said he expected the mats would no longer be used once the replacements arrive.

Woodward, however, said she expected that the mats could still be used to flex capacity if absolutely necessary.

There are also more than 200 other permanent, temporary and transitional housing units ready to come online if proper funding can be secured, though Woodward said the Washington state Department of Commerce has been slow to respond to funding requests made four months ago.

How many of those beds are needed to satisfy the conditions of the Boise decision and allow local law enforcement to close Camp Hope depends on the number of unhoused people staying in the encampment and elsewhere in the city.

Woodward told The Spokesman-Review that her office has requested a list of names of those staying at Camp Hope in order to cross reference them with those staying at the Trent shelter, but has been denied them. Garcia said that she is legally barred from doing so.

“We can’t just give out people’s information who choose not to give their information,” she said. “We protect their private information.

They have to sign for us to even discuss them with another service provider.”

“I don’t understand, why torment these folks?” Garcia said. “You’re flying a helicopter over the camp, putting spotlights over their homes. Why not just come and walk through if you want? “People with PTSD, that sets them over the edge, especially our veterans.”

During the news conference, Woodward said she had heard that the sheriff used helicopters and infrared imaging but wasn’t briefed by the sheriff when he chose to do so to survey Camp Hope.