This car-free Main Street may stay that way, COVID or not
BOTHELL | Not everyone is loving the lack of traffic, but some think the space, which the mayor likened to a European central square, could be part of a trend. 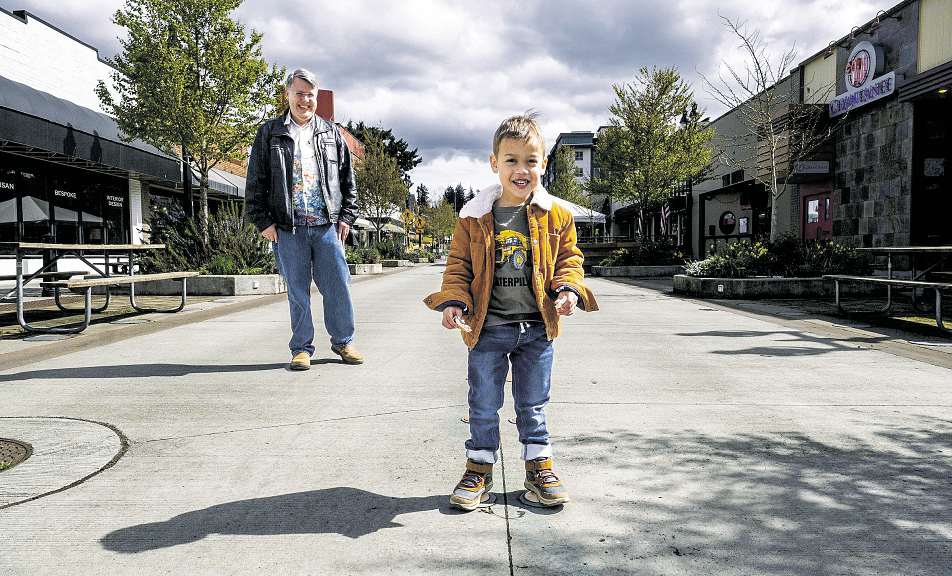 DEAN RUTZ / THE SEATTLE TIMES
Odin Eisenberg is particularly fond of playing in the middle of the street — and that’s OK by his father, Eric, background, so long as it’s in downtown Bothell, where a block of Main Street has been closed since the start of the pandemic. 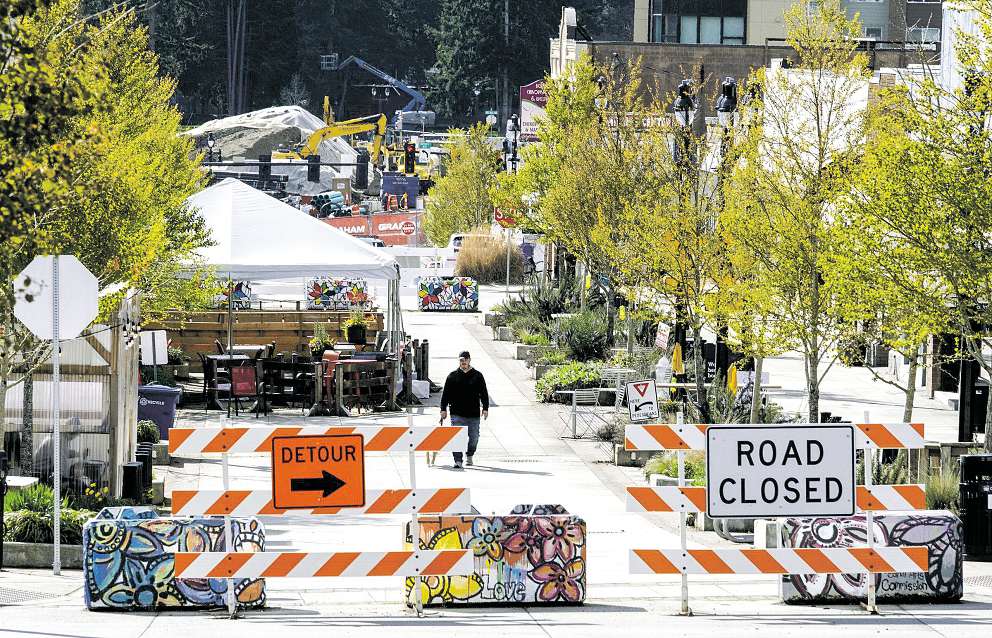 DEAN RUTZ / THE SEATTLE TIMES
The Bothell City Council voted to extend the closure of a block of downtown Main Street for another two years in an attempt to create a community gathering space. A recent city survey found that downtown residents mainly “love the pedestrian area.” Some business owners, however, say the change has negatively affected their sales.
PREVIOUS IMAGE


BOTHELL — Nearly two years ago, Bothell banned vehicles from a downtown street to promote outdoor dining and strolling during the COVID-19 pandemic.

Now, it looks like the cars may never return.

The rapidly growing Seattle suburb will keep the street vehicle-free for at least two more years while studying whether to make the change permanent, based on a split vote by Bothell’s City Council last month.

In one sense, it’s a relatively modest step toward prioritizing pedestrians and nonmotorized activities. The zone on Main Street stretches only one block.

But local activists who pushed for the change say the decision to keep it intact, despite some business and traffic concerns, demonstrates how new ideas are taking hold in Bothell. Experts say communities across the region should be paying attention, and the mayor is comparing the space to a European central square.

“It’s nice to have at least one block that doesn’t privilege drivers,” said Amanda Dodd, who’s been part of the group Bo-POP (Bothellites for People Oriented Places), which organized for the car-free zone. “If we can show people what being protected feels like on this street, it’s going to be that much easier to advocate for some level of protection on other streets.”

“ROAD CLOSED” signs and heavy concrete blocks spray-painted with flowers guard the block ends. According to a city survey conducted ahead of the council’s March 15 vote, first covered by The Urbanist, downtown residents generally “love the pedestrian area.” Though he lives in a different neighborhood, Eric Eisenberg does, too.

“It encourages people to come down and have some sense of community,” Eisenberg, 43, said last week, snacking on cheese curds outside a brewpub while his 3-year-old, Odin, played in the street. “The little guy can run around and I don’t have to worry about him getting hit by a car.”

Bothell created the carfree block in June 2020, hoping the change on Main Street between 101st and 102nd avenues would turn the city’s historic downtown into a social hub and boost business at a time when indoor activities were restricted for COVID, Mayor Mason Thompson said.

For businesses like The Bine brewpub, the outdoor dining environment helped “1 million percent” as the pandemic raged, said coowner George Marshall, who built covered seating in his parking spots. Another restaurant expanded all the way into the street and the pedestrian zone was a draw, especially during nice weather, Marshall said.

Not all businesses have benefited: Nine surveyed by the city reported positive impacts, while seven reported negative impacts.

Francesca Cohn, who runs a handicrafts store below street level, Sankara Imports, said the change disoriented some of her customers.

Rachman Cantrell, who opened Bothell Jewelers and Collectibles in 1987, said the car ban has been “a disaster” for his business, which caters to seniors and closes at 5:30 p.m., before the restaurant rush.

“There’s no traffic going down the street, so nobody sees my shop,” he said.

Marshall, from The Bine, thinks the city needs to arrange more markets and concerts on the block, which hosted a Diwali celebration last year. There are plans for Friday night markets this summer.

Even among retailers, perspectives vary. Paul Kavanagh, who owns Woodland Optical of Bothell, said elderly clients can no longer be dropped off at his door.

But Chelsea Coryell’s interior design store, First & Main, gets “flooded” with accidental shoppers from the zone’s picnic tables. “They pop in to see what we’re about,” then end up spending money, she said.

Though banning cars was initially a COVID strategy, it jibed with Bothell’s urbanist aspirations. The city’s population grew 44% between 2010 and 2020, nearing 50,000, as its downtown added hundreds of new apartments.

After a fire in 2017, the city spent $7 million to revamp Main Street, rebuilding the sidewalks without curbs and replacing the angled parking with planter boxes and “flex spaces” for parallel parking or dining.

On the one hand, “There was already momentum” to do more, said Cary Westerbeck, an architect who founded Bo-POP and who lives downtown. “They were already trying to reduce commuters zooming through,” Westerbeck said.

On the other hand, messing with motorists is something most politicians are scared to do. The pandemic presented cities around the country with low-risk opportunities to experiment, said Branden Born, an associate professor of urban design at the University of Washington.

Seattle closed many streets to pass-through vehicles to promote walking, biking and rolling.

Seattle is making many of its “Stay Healthy Streets” permanent, but most are located in residential neighborhoods.

Edmonds and Kirkland have closed central streets to cars, but only in the summer.

“There can be a tendency to return to business as usual, so what’s happening in Bothell is quite significant,” said Jeff Hou, director of the Urban Commons Lab at UW.

Thompson, the mayor, is thinking big. Neither Amsterdam nor Brussels were pedestrian paradises in the 1970s. Now their squares teem with tourists.

“It’s not common around here, but everywhere we like to go on vacation it absolutely is,” he said.

Rio Dorion, 32, likes the new-look Main Street and how the city is changing, she said on her way into a bar last week: “Little places to go out” without having to travel to Seattle.

The city might need to return $900,000 in federal funds for Main Street’s revamp a few years ago, because the feds assumed the project would serve cars. If traffic resurges post-COVID, diverted cars could clog a parallel street used by public buses, the city’s capital projects manager said. Before the pandemic, Main Street saw about 6,000 vehicle trips each day.

People who rely on transit are more likely to be people of color and people with lower incomes, Bothell’s interim city manager added, with staff noting the council could choose to close the block only intermittently.

Thompson described the traffic challenges as theoretical, and other council members said they wanted more equity research. Some residents surveyed said intermittent closures would be confusing. Ultimately, the council voted 5-2 to keep the special zone through March 2024.

Adjustments will likely include dedicated drop-off spaces at the block ends and parking spots for people with disabilities.

The experiment has irked Christy Graham, of Graham’s RoyalTea on Main Street’s next block. Not because she dislikes the idea — she wants the same car-free treatment, she said, so she can serve high tea outdoors.

This coverage is partially underwritten by Microsoft Philanthropies. The Seattle Times maintains editorial control over this and all its coverage.