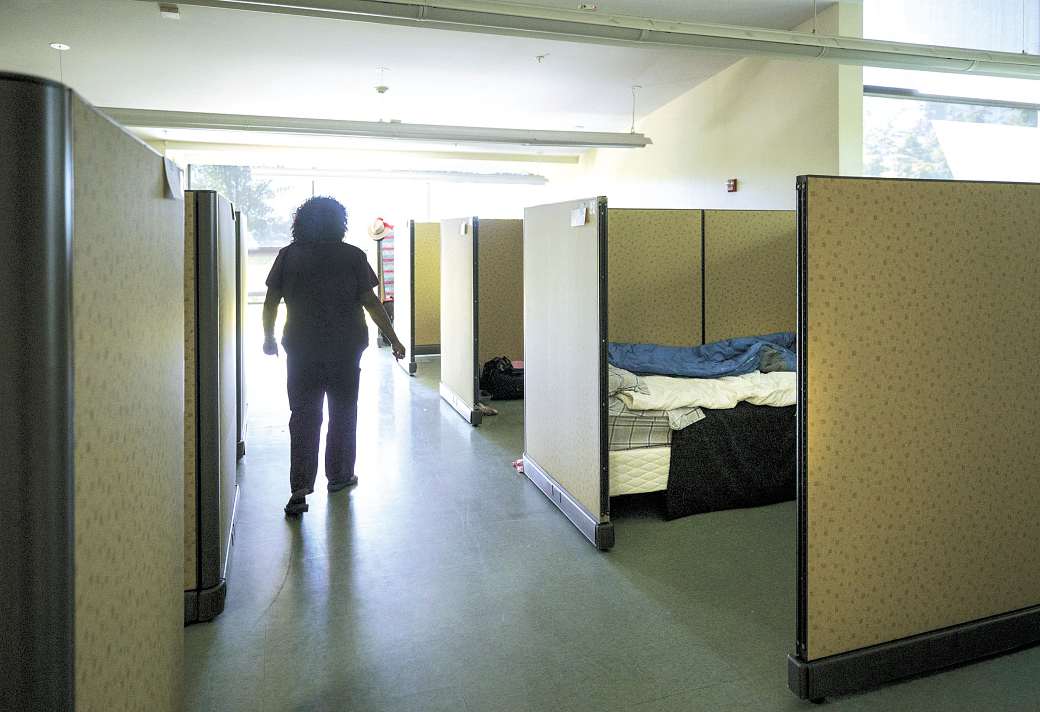 STEVE RINGMAN / THE SEATTLE TIMES
The women living at the new Bunny Wilburn shelter get cubicles of their own. Catholic Community Services of Western Washington program manager Cynthia McGee leads a tour of the facility, which used to provide child care. 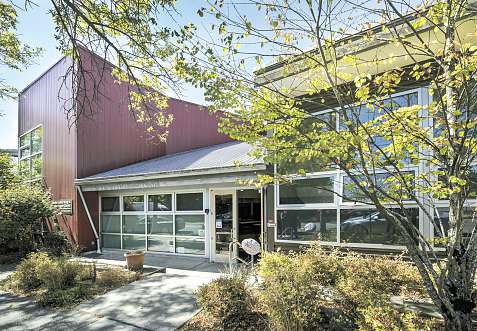 NEXT IMAGE
Dozens of homeless people staying in 3 centers move on
SHELTER | Community centers are shifting back to use by the Parks Department.
By SYDNEY BROWNSTONE
Seattle Times staff reporter
PROJECT HOMELESS

Six months into the COVID-19 pandemic, and after a second spike of infections this summer, dozens of people sheltering in three Seattle community centers have moved out as the buildings shift back to use by the Parks Department.

The city started setting up the community centers in March in response to the realization that the crowded, congregate homeless shelters that form the backbone of the city’s shelter system were unsafe for people living in them. To thin out the shelters, where people sometimes slept on mats just inches apart, some shelter clients were moved into the community centers.

Now, the temporary residents of the Miller, Garfield and Southwest Teen Life community centers are moving back to a shelter system permanently transformed by COVID-19.

On a warm September morning a block away from Judkins Park and Playfield, construction workers were still building a shower inside the Martin Luther King Jr. Day Home Center, once a child care facility for the neighborhood. A “Welcome Home!” balloon bobs near the entrance of the building where 40 homeless women now reside.

Before COVID-19 struck, these women were sleeping on mats on church floors. They were awakened at 5 a.m. daily, said Catholic Community Services of Western Washington (CCSWW) program manager Cynthia McGee, and had to head out and take all their things with them.

When they moved to the Garfield Community Center, they slept on cots in one room.

Now, at the Bunny Wilburn shelter, which is operated by CCSWW, the women each have a cubicle for privacy — and social distancing.

The cubicles are spread over two floors in a big building with natural light streaming through the windows.

Their beds have box springs.

They don’t have to rush out with their things in the morning, and can eat three meals a day at the shelter, named after the founding director of the Martin Luther King Jr.

Day Home Center as well as the Seattle affiliate of the National Black Child Development Initiative.

“I love the fact that they can stay in,” McGee said. “They don’t have to drag their belongings up and down the street in all kinds of weather.

They can take a shower when they want to. They don’t have to worry about where they get their next meal from. I just really want them to feel like this is their home. “ Early on in the pandemic, COVID-19 exposed longtime flaws in the shelter system, including the inherent risk for infectious disease that accompanies having large groups of people sleeping together in one room. But it also exposed conditions that advocates had long argued deterred people from coming into shelters in the first place, including a lack of privacy as well as concerns about safety and sanitation.

“The broken system was working for so long, that’s all we knew until COVID hit,”

McGee said. “COVID is a negative thing, but it turned out to be positive in a lot of different ways.”

In the smoking area outside, facing a view of forest to the south, 34-year-old Odessa Lavigne — a street name — said she had never heard of something “so luxurious” as the cubicles.

Lavigne has experienced bouts of homelessness since she was 19, she said, when she gave birth to her son in a tent.

Since moving into the Bunny Wilburn shelter less than a week ago, Lavigne said the improved conditions have already started contributing to changes she sees in herself.

“[It feels] like we’re being acknowledged as human beings, not just like riffraff, social overflow,” Lavigne said. “It encourages you to just kind of come out of your shell as a human being, rather than just, I feel like, you don’t really belong. Emotionally, it builds your confidence, your self-esteem.”

Shelter residents at the two other community centers — Miller and the Southwest Teen Life Center — have moved to other temporary locations as new shelter facilities are being completed.

Forty-five men staying at the Miller Community Center on Capitol Hill will eventually move to a new shelter at Compass Housing Alliance’s Pioneer Square offices, which will also have individual sleeping spaces. YouthCare’s 15 beds at the Southwest Teen Life Center in West Seattle have moved to a Beacon Hill church as construction is completed on a new South Seattle shelter facility.

Mary Steele, interim executive director of Compass Housing Alliance, said providers knew they could not continue to house people in congregate settings with the threat of COVID-19 still present.

“Thankfully the city agrees and has made this opportunity for us to convert everything,” Steele said.

Overall shelter capacity, however — and the availability of low-income and permanent supportive housing — isn’t enough to address the needs of more than 8,000 people estimated to be experiencing homelessness in Seattle.

Just 14 people were able to transition to permanent housing from the community centers since March, according to the city, as the COVID-19 shutdown has slowed shelter turnover, new construction and housing placements.

And at Compass, increased safety comes with a drawback: With the creation of new, individualized spaces, the organization will lose approximately 13 beds.

“They will not be able to house quite as many people as they did in the past under the old model, but it will be in a safer space,” Steele said.